In Lenape Culture the importance of Fire was both practical and ceremonial. Heat, cooking, and tool making were all practical uses of fire but there is a much deeper understanding of fire, so much so that it is regarded as “Grandfather” in Lenape Culture. Like everything in Lenape life there is a balance, while Fire is designated as “male” the balance, water, is considered “female” and the human “caretakers” are respectively male and female, that is men generally are responsible for making and caretaking of fire and women are the caretakers of the waters. Fire was maintained year round, and was central in ceremonial life. Offerings of tobacco, fat, and meats were offered to the spirits through the Fire, red cedar was sprinkled on the hot coals from the fire to purify, or “smudge”, stones of granite and limestone were heated in the fire to heat the Sweat Lodge, and the Fire marked “center” for the night dances. In the Gamwink or Big House Ceremony there were 2 fires, one to the East and one to the West of the Center Post. On the ninth night of the Big House Ceremony the “old” Fire is put out and a new Fire is made using only the Pump Drill(see below) or the Flint and Steel(see below), no other means of making fire is accepted in ceremonial use. Only a person who is considered “Pure”, or Pilsit, is permitted to make the fire. If the person fails to make the fire it is believed that they are not “clean” and they did not live a ceremonial life adhering to the cultural practices and “taboos”. With the putting out of the old fire it is believed that all grudges and “bad blood” was forgiven, and with the new fire came a fresh start for all involved, a renewal of the of the year. In historic times this fire was probably kept burning it some way until the following year when the ceremony was held again, in more modern times it was “symbolically” kept burning. While there is certainly a high respect for the Fire and its role in practical and ceremonial life, the Lenape were not “fire worshipers” as some early documents would lead one to think.

Used by pumping up and down to create friction on a base of “soft wood”. The friction will create an ember, which falls through the “v”, notched into the base, onto a bed of tinder. The Lenape Name “ringing noise tool” derives from the “ringing” or “whistling” noise made when working the tool correctly. The same tool is used as a drill (pepkweshikan) for boring out adornments, bone, shell, and “soft” stone by simply attaching a flint “drill bit” to the end. 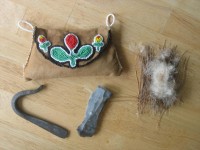 Used by striking flint against the steel to create a spark in the tinder, often cattail or fiber and dry pine needles were used.  In olden days, this and the Pump Drill were the only 2 ways acceptable for making a Ceremonial Fire. 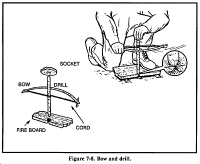 Probably one of the oldest forms of friction fire making. While there is no word in our language for this it was most certainly used. A “pin” is held in place by a stone “socket”(seen in the tools section) or a “socket” made of a harder wood such as oak or “iron wood”, the “bow string” is wrapped around the “pin” and friction is created by a back and forth motion. A soft wood is used as the base, with a “v” notched out for the ember to fall onto the tinder.

Capturing the Beauty of Pow Wow A Few Traditional Games