What is a Tribe?

What is an American Indian Tribe?

Tribal authenticity is a critical issue as there are many recently established non-historic claimant groups that can confuse the non-Native public and frustrate the cultural preservation efforts of, and relationships between, authentic tribal communities.  It should be noted that tribal “legitimacy” or “authenticity” is a matter of much debate, even between tribal communities. Recognition by the federal, state, or other tribal governments are used as a measures of authenticity, but may not be  the only determining factors, as there are legitimate tribal communities without official governmental recognition.

Essentially, a “legitimate” or “authentic” tribe is:  A continuous community of interrelated descendants of a historic American Indian Tribe or tribes that has maintained internal governance and tribal identity in some manner that can be documented from at least the 19th century or earlier.

This is important because of the recent rise of a myriad of American Indian cultural groups that claim to be tribal governments. These groups have confused the public, academic institutions, local governments, and even historically documented tribes. The claims of such groups make it difficult for authentic historical tribal communities to assert identity and sovereignty and preserve our culture.  Even if a group of American Indian descendants formed an organization, it does not make that organization a “tribe.”  An authentic tribe has a community history that is continuous.    To claim the nomenclature of a “band,” “tribe” or “nation” requires some form of interrelated historic tribal families living in community and maintaining tribal governance for at least a couple of hundred years.

In Lenape Culture the importance of Fire was both practical and ceremonial. Heat, cooking, and tool making were all practical uses of fire but there is a much deeper understanding of fire, so much so that it is regarded as “Grandfather” in Lenape Culture. Like everything in Lenape life there is a balance, while Fire is designated as “male” the balance, water, is considered “female” and the human “caretakers” are respectively male and female, that is men generally are responsible for making and caretaking of fire and women are the caretakers of the waters. END_OF_DOCUMENT_TOKEN_TO_BE_REPLACED 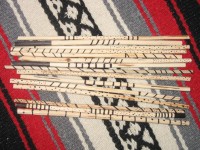 Played much like the “American” games “Jackstraws” or “Pick-up-sticks”, a number of pieces are cut from bog grass or reeds, usually between 50 and 65. 15 of these are marked with pigment paint or by burning, the remaining sticks are left plain. The pieces are mixed up in the hands and dropped onto a blanket, then the 2 players take turns using a porcupine quill to collect the “sticks”, without disturbing any other sticks. The unmarked pieces are 1 point while the 15 marked pieces are 5 points, and the game is played to a predetermined number, usually 100, score is kept with seeds, corn kernels, pebbles, or whatever is available. END_OF_DOCUMENT_TOKEN_TO_BE_REPLACED

The Following is a very brief introduction to Lenape plant use.  I have chosen some of the “common” plants that you might see on a daily basis, in this area, and given their Lenape name and a very brief explanation of their use.  This is not even scratching the surface of Native Medicines. That is a presentation all of its own, my intention is only to give you something to think of the next time you are walking or driving along and see one of these plants. END_OF_DOCUMENT_TOKEN_TO_BE_REPLACED